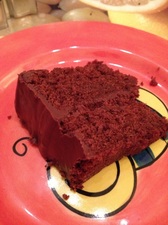 Preheat the oven to 180C and grease and line two 8in tins.

Mix the cocoa and boiling water into a paste in a large bowl, the add the remaining ingredients. Beat until it becomes smooth and thick. Divide between the two tins and bake for about 25-30 mins until the tops feel springy. Leave to cool in the tin for a minute then cool on wire racks.

To make the icing and filling melt the chocolate in a bowl over simmering water (I use half milk chocolate so it is not too bitter for a little person, but you can just use dark chocolate). When the chocolate is melted, remove from the heat and add the butter and stir until it has melted in. Spread over the cooled cake and decorate to your own taste! 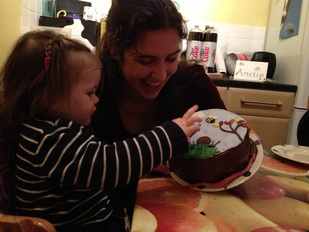 I used this recipe for Amelia's birthday cake for her second birthday. It is the first time I have made a gluten-free chocolate cake that wasn't dry and crumbly. It had a good texture and was lovely and moist. It was firm enough to take some decorating! It is a mix of several recipes by Mary Berry, none of which I had managed to make work on their own as a gluten-free version. This one however, was delicious. Didn't last more than three days due to me eating it but was just as delicious on day three...